Intern Response: Corporate Tech in Line for its Pandemic Haircut

The claims made by Dan Gallagher in his WSJ article Corporate Tech in Line for its Pandemic Haircut are directly contrary to what Golden Section Venture Capital believes to be the case: Gallagher claims the COVID-19 pandemic will lead to dramatic reductions in corporate tech budgets, while Golden Section believes the pandemic will serve to boost the tech industry, including corporate tech spending, because of the need for reduced face-to-face interactions and increased levels of remote working.

Gallagher backs his claim with a Morgan Stanley quarterly survey consisting of 100 chief information officers from around the US and Europe in which 83% of respondents said they have downwardly revised their budgets in light of the pandemic. The survey revealed there is an expected 4.4% decline in corporate tech budgets, which is a 7.9% drop from the expected 3.5% gain reported in the previous quarter’s survey. According to Morgan Stanley, this is the first time in the 10-year history of the CIO survey in which there is an expected decline in tech budget.

However, despite the results reported by the Morgan Stanley survey, tech stocks continue to soar, the BVP Nasdaq Emerging Cloud Index has surged 66% since the start of the pandemic, and a survey of IT buyers conducted by Cowen revealed that they think IT spending will increase by 3.7% for the year. So, what gives? Is there some truth behind Dan Gallagher’s article, or does Golden Section’s thesis remain intact? For answers, let’s look at the cold hard data and compare it to similar data from the Great Recession in 2008-2009.

According to FRED, the economic research department of the St. Louis Federal Reserve, the future technology spending index was at 27.5 in December 2019, only a few months prior to the economic shutdown resulting from the pandemic. When the pandemic struck, the index plummeted to -11.0 by April of 2020, a drop off of 38.5 points. That April mark represented the lowest point the index would reach before beginning to recover, having climbed 17.3 points to a mark of 6.3 by June 2020.

These numbers seem promising, but do they really mean recovery is on the horizon? How does this crash, and subsequent recovery, compare to that of the Great Recession in 2008-2009? Let’s look at the data. Prior to the crash in 2008, the FRED future technology spending index was at 14.9, and it dropped to -23.6 in a matter of months. Interestingly enough, this was a 38.5 point drop, which is the exact same drop off experienced as a result of the COVID-19 pandemic. As the market began to recover after the crash in 2008-2009, the index rose from its lowest point of -23.6 in March 2009 to -4.5 in May of the same year, which is an increase of 19.1 points, only 2 points ahead of the pace at which the index is recovering from the COVID-19 pandemic. After this initial recovery in 2009, the index stabilized and returned to normal levels for a prolonged amount of time, which offers hope that the index, and the industry as a whole, is well on its way to recovering from the COVID-19 pandemic.

This data is represented in the graph below, which illustrates the remarkable similarity in the curves of the Great Recession and the COVID-19 pandemic to date.

Unfortunately, because the Morgan Stanley CIO survey has only been around for the past 10 years, the survey was not conducted during the Great Recession, so there is no way to see what the data would’ve been like then. However, if I had to venture a guess, I would say the results then would be fairly similar to the results now, and it is clear from the data that corporate tech spending after the Great Recession recovered just fine.

It should also be noted that the data from the Morgan Stanley survey is perhaps slightly misleading due to the fact that in recent years, many CIO’s have had less and less control over their company’s tech budgets, with fewer than half of CIO’s having any input whatsoever. Even then, many CIO’s inputs are very limited, as tech spending decisions are being handled by a much broader range of people in a company than ever before. As a result of this, it is possible that the CIO’s in the survey did not have as clear a picture as they thought of what their company’s tech budget really looks like.

If the data offered by FRED hasn’t convinced you that Gallagher’s claim is false, let’s look at other sources. According to a survey conducted by Spiceworks, an Austin based professional network for the IT industry, 88% of respondents believe there will be either an increase or no change in IT budgets for 2020, while only 8% of respondents believed IT budgets would decrease. Additionally, at a much larger scale, the Empire State Manufacturing Survey reports that general business conditions have greatly stabilized, with the index having climbed back to 0 after being at nearly -50. Forward looking indicators from the index are even more encouraging, as they suggest the general business conditions will continue to climb.

It is safe to say that Golden Section’s thesis is secure. There is more than enough data supporting the claim that the COVID-19 pandemic will boost the tech industry, not cause a corporate tech budget reduction. There may never be a better time to invest in tech, or B2B SaaS, because, as GST says, we could very well be in the golden age of B2B SaaS. 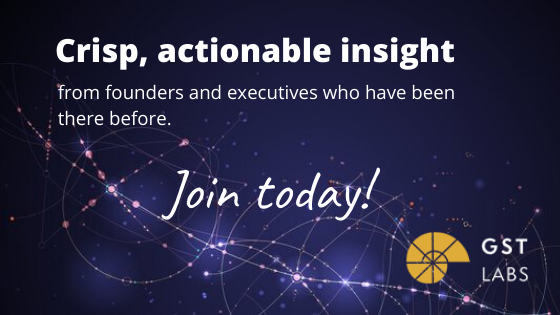 ACTIONABLE INSIGHT FOR SEED AND SCALING B2B FOUNDERS AND TEAMS